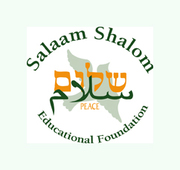 Website: http://ssefoundation.org
Location: Our work is in Israel and Palestine. We are based in LA.
Peacemakers: 23
Latest Activity: Jan 5, 2013

Abridged Ten Steps for Peace Educationbased on Alliance for Childhood Make Room for Peace at Home Outer peace begins with inner peace. Children        and adults need special places that give them a…Continue

You need to be a member of Salaam Shalom Educational Foundation to add comments!

Comment by Andrea Phyllis Lotker on April 7, 2011 at 4:59pm
@Ventura/LA County area this weekend? Check out this informative and healing event! I've been a volunteer with this org2yrs &its bringing education to what's going on in the Holy Land. : ) FindOutWhatWeDo&HowWeBringPeace2TheHolyLand&2
SoCalAlso!Sun,April10@ 4:00pmto5:30pm@WestlakeVillageComntyRm (WLVCityHall &Library between Reyes Adobe&Lindero Canyon,south side of Agoura Rd. 31200 Oak Crest Drive,WLV, CA 91361

Comment by Andrea Phyllis Lotker on February 11, 2011 at 1:15pm
Nomination of Salaam Shalom Educational Foundation for Season of Nonviolence
Martin Luther King, Jr. said, “People fail to get along because they fear each other; they fear each other because they don't know each other; they don't know each other because they have not communicated with each other."
Salaam Shalom Educational Foundation seeks to address the core root of violence which Martin Luther King Jr. believed came from the lack of capacity for communication and listening. Situated in Los Angeles, Salaam Shalom co-sponsors peace education schools in the Middle East while participating in, and leading a number of projects for peace locally.   Salaam Shalom Educational Foundation promotes a paradigm for peace based on the power of innovative educational methods and a heart-based form of communication known on the Way of Council.  The Way of Council is form of community building/contemplative group communication based on four simple tenets:
Salaam Shalom Educational Foundation has:
-hosted  interfaith BE THE PEACE Walks which are silent meditational walks in the Santa Monica Mountains followed by the Way of Council.
-helped dispel myths in Los Angeles that there will never be peace in the Middle East by arranging a series of Los Angeles joint appearances by a pair of their peace education teachers from Israel - one Jewish and one Arab - are who championing peace in the MIddle East.
-taught the Golden Rule as a universal principle in all major religions to school children.

Comment by maher marahil on December 27, 2009 at 7:46pm
it is soo nice to participate with ur activities

Comment by Eyal Raviv on December 25, 2009 at 8:33am
Great! This group is recommended on mepeace.org.

Comment by Oliver Haack on December 23, 2009 at 12:22pm
Great effort, Andrea. I'd love to hear more about the activities of the SSE-Foundation. I think the consequences of chronic stress in conflict areas are greatly underestimated.

Do you have working experience in Sderot?

Rachelle Fender is now a peacemaker on mepeace.org
2 hours ago
Welcome Them!