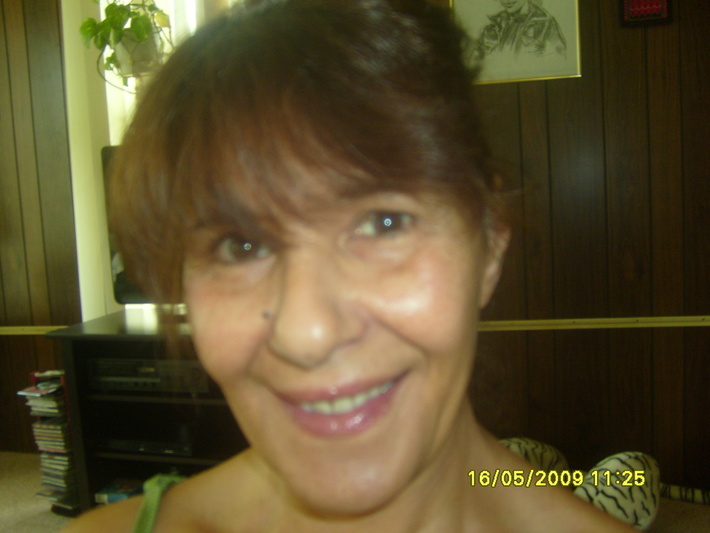 My personal story:
I am a Palestinian addopted by british at the age of 9 and braught up in the UK. Now married to an american and living in the USA. I had two older brothers that died fighting the Isralies and many family members who have and are still suffering because of the situation there.But I also see many Israelies suffering too. I have been condemed by many of my people as a traitor as I believe we should and can live together in peace. I truley believe

Why I want peace:
The Holy land is soaked with the blood of inocent victems on both sides.The children are taught to hate . We need to teach the children compassion, tollerance and forgivenes. That is the only way to peace..

Interests and activities:
I am boreing! I like to read, gardening, cooking and just being an ordinary housewife

Something you didn't know about me:
.I was braght up in an orphenage in Ramalla from the age of 5 till i was addopted. When I was addopted I wasnt allowed contact with my family back home. or speak my mother tongue. The resentment still burns today

How I found mepeace.org:
Just by chance, maybe God led me here

What I want to achieve here:
I would like to meet like minded people from both sides, learn about their lives and views. It is only by sharing and understanding that we can learn to respect others

It gave me hope to live in peace and dignity. I learned that violence only breeds violence and that peace is the only solution for the two nations, the only way for both to have a respectful and beautiful future. We live on the same land. We are neighbors. We drink the same water and both pray to a monotheistic God. We must live in peace on the basis of religion for God and land for everyone

Irit Hakim-Keller said…
hello Angele
thanks for the add.
have a happy new year.
irit

SALAMEH LADADWEH said…
Hello Angele
thank you to add me afriend of you . Happy new year to you .IT IS NICE THAT YOURS ORIGINS ARE FROM rAMALLAH . IAM FROM RAMALLAH TOO . I HOPE TO MEET IN PALESTINE ONE DAY.
BEST WISHES

Paul Ogden said…
In one of your posts you indicated you were looking for family.

There is a chain of mini-markets in Toronto called Rabba Fine Foods: www.rabba.com. Back in the early 80s, when the company had only one outlet, I shopped there frequently and became friendly with the owner, a man named George who was born in Bethlehem. We conversed in English and Hebrew. He told me that he was born in Bethlehem, but happened to be in Haifa when Israel declared independence and could not return home. He eventually moved to Canada and some years later opened his first mini-market.

Good luck in your search.

harry deloria handenero said…
hello miss angele lourice clark this is harry and thanks very big for your comment or litte message to me you understand me and have a often mind too ...yes its true that i have anger to somebody but i know even you also have anger to somebody not only you show to somebody but me i need to tell to everybody or somebodythat i get mad to someone this is me..but i'm a peace maker dearest angele and thanks too that you have no words that i been upset not like mr.oliver haack from germany frankly said that never i wrote anymore here or what ever saying something to say in column not like you your so very open minded that gods give to you and me god bless you too as well as your family circle and have a good health to you all their thanks for your comment on me...me god bless again to you..

I look forward to your contributions.