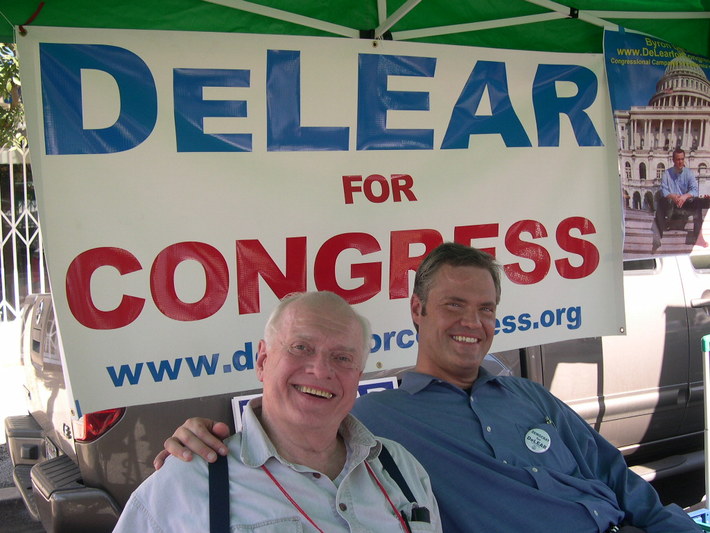 Ways We Can Help MEPEACE Realize Our Dreams

My personal story:
I co-founded an NGO named Global Peace Solution in 2004 with Ofer Lifschitz, currently chairman of the Israeli politcal party Brit Olam (In Hebrew, "Eternal Covenant" or "World Alliance"). I have ran for the US House twice and continue to work with NGOs interested in fostering a more sustainable expression of civilization.

Why I want peace:
For the sake of our children, we must find kinder and gentler forms of conflict resolution. A peaceful culture concerned with inculcating a nonviolent ethos will be better prepared to contend with civilization's industrial and technological advancements that potentially threaten us all. Survival demands diluting our predatory nature and finding sustainable and peaceful diversions for humankind's innate aggressive tendencies.

Something you didn't know about me:
I'm not big I just look a little closer.

How I found mepeace.org:
I met Eyal Raviv, Mepeace director at the Jaffa Conference in Israel

What I want to achieve here:
I would like to meet like minded individuals to network with the goal of helping to create a culture of peace and to contribute to moving our evolution forward. Like-minded likes like.

Tenth Anniversary of 9/11: Remember This Day

“A second plane has hit the World Trade Center”, was the announcement on the radio early in the morning on the West Coast. Awakened to a horror that millions were witness to—soon capturing the attention of billions around the world. None of it seemed real. And then the buildings came down.

The first plane to hit WTC was American Airlines Flight 11, which on September 11th, smashed into the North Tower instantly killing all on board and fatally trapping 1,344 people.

Only a day… Continue

Obama calls for Syrian President to step down; UN cites crimes against humanity

I’d like to unpack a little American zeitgeist for you on the Afghan war.
A recent Washington Post-ABC News…
Continue

Thomas Henry Culhane said…
Thanks B. God job over there on J street! Always glad to be connected with you and the circle within which you circulate!

fesalk411 said…
The Symbol of Peace

The symbol of peace falls in the land of peace
Will we give them the chance to bring down the symbol of peace in the land of peace?
Many people know this is a plot of land full of olive trees.
And many Israeli and Palestinian families make a living from these trees
Especially that so many Palestinian families do not have another source of living,
except these olive trees

Days before the start of the harvest, especially in the West Bank,
What happened was expected, the start was of some settlers groups fighting Palestinian families
and preventing them to enter to the olive harvest,
Then the settlers started shooting the Palestinians, and set fire in the trees
Finally, with the help of European, American, Israeli, and other people from all over the world,
Some Palestinian families succeeded to collect their olives.

So, I am the address to thank all those who helped these families and brought them happiness,
And say to the settlers: We will not let you bring down the symbol of peace
For the olive trees are the symbol of peace in the land of peace

fesalk411 said…
A True Story By Faisal Al-Hatib
I am a Palestinian Arab from Hizmeh, a village between Jerusalem and Ramallah. When I was 15 years old I fought against the Israeli Occupation in search of freedom. At that time I thought every Jewish person, whether soldier or citizen, man or woman, young or old, should be killed. I rejected the right for any Jew to live and every Jew was a target. I was just a kid, believe me, and I didn’t understand anything about politics or the Arab-Israeli conflict. I was arrested and sat in jail for 12 years. This was during the first intifada from 1987. At that time nobody talked about peace but only of violence. I matured during my time in jail. I started studying and reading books on politics, literature, poetry, and about the Madrid Conference.

Dan Lieberman said…
Byron,
After reading my comment I fear it sounded too aggressive and contradictory.. Please excuse me if it did seem that way. I only wanted to use the opportunity to express some thoughts I have had; that neither the clouded history nor the hysterical religious attitudes should be allowed to play a role in what is a political and social process.They only confuse the issues and prevent a solution. I well appreciate your efforts for peace and justice and hope I haven't interfered with your well warranted expressions.

Nicholas Truske said…
thank you Byron for your note & your friendship. I appreciate reading of your accomplishments & passions for peace. I look forward to learning & sharing with you & working together for peace.

Eyal Raviv said…
Welcome Byron,
Grea to see you here. Enjoy us. Volunteer , read our News, follow our Guidelines and use our Features. If you have a question, see our FAQ. Want to Support us? Please share your Feedback, and Invite your friends to join us.

Jill Harrison said…
Hello Byron -
What are your thoughts on establishing a Department of Peace?

I believe that we need to study Peace as much as we study war. I would love to share with you the effects of a Restorative Justice program here in Baltimore, which has had a great impact working with children and gang activity in our schools and Juvenile justice system.

Rachelle Fender is now a peacemaker on mepeace.org
2 hours ago
Welcome Them!