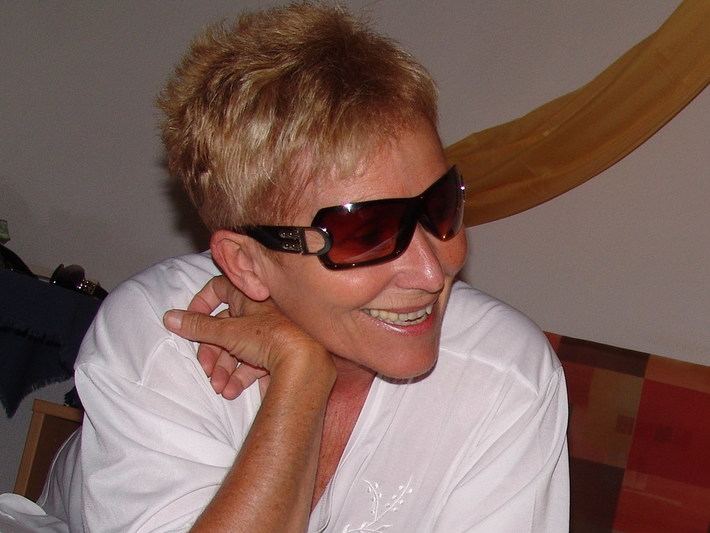 Why I want peace:
very difficult the life without peace

Something you didn't know about me:
photohobbist, painting

What I want to achieve here:
seeking with others a solution....never know....

Last June 24th approximately 2000 people embraced the Old City of Jerusalem. They walked around the city walls, holding hands and expressing the unity of the Old City. Inhabitants of Jerusalem, Israeli and Palestinians, as well as peace activists from the entire world are standing side by side in their wish for peace and in their love for Jerusalem.

Since 2007 the Jerusalem Hug has been organized, as a collaboration between the ‘Lovers of Jerusalem’, the ‘Jerusalem Peacemakers’ and a Dutch group of light workers coming from Amsterdam.
The ‘Lovers of Jerusalem’ are a group of people from several peace movement organizations in Israel, under direction by Dvora Pearlman, established to create peace in Jerusalem.
The ‘Jerusalem Peacemakers’ consists of a group of passionate and involved Jewish and Palestinian inhabitants of Jerusalem under direction of Eliyahu McLean and Ibrahim Abu el Hawa who form an international network on inter religious bases with the aim to create peace and unity in Jerusalem. “When real peace in the holy land will be realized, then it will be possible to engineer peace in the whole world.”
In Amsterdam, the Netherlands, Rob Schrama, artist and peace activist, supports the ‘Jerusalem Hug’ together with a small team of involved and passionate fellow workers.

Together we established the ‘Jerusalem Hug Foundation’ that will be involved to get international support.

On May 21 2007 and on June 24 2008 the Big Hug of Jerusalem took place for the first and second time. Both Jerusalem Hugs were visited by more than 2000 participants, inhabitants of Jerusalem, Palestinians and Israeli, as well as peace activists from Israel and from all over the world.

On June 21 2009 a new Jerusalem Hug will be realized. The aim of the Jerusalem Hug is to promote a peaceful experience of freedom and joy to all people. The Jerusalem Hug will focus on love, respect and unity. With this attitude the participants will spread out around the walls of the Old City holding hands, singing and praying for peace and respect for all humankind.

Drumming together is an returning activity in every Jerusalem Hug, connecting the different population groups. During the first Jerusalem Hug in 2007 Palestinian and Israeli drummers from Jerusalem played together. As a result of this experience they decided to continue playing together. Several times they played together at the Damascus Gate to stimulate the rhythm of peace in the hearts of the people.

During the coming Jerusalem Hug, the Palestine and Israeli drummers will get support from internationally famous drummers. GrandMotherDrum, coming from Alaska and Cesar Zuiderwijk, drummer in the rock band ‘Golden Earring’ will invite all drummers in Jerusalem to create together a concert in the park along the north site of the wall.

The Jerusalem school kids, at least one class of Palestinians and one class of Israeli children are coming together during the Jerusalem Hug to fly their Kites for Peace above the thousands of participants. They will express that the children of Jerusalem want to live in a city were peace, freedom and tolerance are the foundation of our coexisting.

The ‘Jerusalem Hug’ stands symbol for another way to achieve peace. Everywhere the belief in a political solution of the Middle East conflict has been gone down to point zero. There ought to be found another way and that is the way of the heart. We believe that when we find peace in ourselves and when we are able to forgive, world peace will come closer.
The Jerusalem Hug gives expression to this wish for change as a concrete statement. Jerusalem stands as a symbol for peace and forgiveness in the world. Let Jerusalem be a city of connection, the heart of the world where unity and peace will be a fact. Every year, we will increase the Jerusalem Hug to a lager event, with every year more and more participants. Let the ‘Jerusalem Hug’ fill Jerusalem completely with love, so there will not be place for hatred anymore.

We request you to send a letter of recommendation to the Jerusalem Hug Foundation, a supporting letter that we can send to the funds we are approaching for financing our event. The best way to send this letter before December 24 to the “Jerusalem Hug Foundation” Krom Boomsloot 16, 1011 GW Amsterdam, The Netherlands or email it to: mail@jerusalemhug.org

We thank you for your cooperation and we hope to hold hands with you during the coming Jerusalem Hug.

Max S said…
Sorry I didn't understand your message. Can you explain. What group?

Rob Schrama said…
The ‘Big Hug’ and the future of Jerusalem

The sting of all problems between Israeli and Palestinians lays in the Old City of Jerusalem. Her status has to be solved in such a way, that all parties fighting for control over her can agree upon.

On June 24, the ‘Big Hug’ will be hold in Jerusalem. Light workers from Israel, Palestine and from all over the world, ‘Lovers of Jerusalem’, will come together to bring warmth and energy to this city, embracing holding hands the Old City. If we bundle all our positive energies and bring these to Jerusalem, we can create peace to this exceptional place.

We are organizing the Big Hug to make the people aware –especially the Israeli and Palestinian inhabitants of Jerusalem- that there is a very shaped perspective for the city of Jerusalem as a city of peace: a new, undivided Jerusalem, as the capital of Palestine, Israel and at large.

Let go of the conflict concerning her command and dedicate the city to the Omnipresent. The Old City as a whole is His Temple. To give the walled Old City free to God, as a "Status Apart”, as an independent city, will be the most feasible way to come out the current impasse.

The Old City of Jerusalem must become an open city; a House of Prayer for all the Peoples. This perspective is written down in the Holy Books, this is the perspective we, as ‘Lovers of Jerusalem’ embrace as well as solution. But how many people does already notice this hopeful point of view?

What I saw in Jerusalem and also everywhere else where I meet Islamic and Jewish people is, that not so many persons really think about a future for Jerusalem. Most of the time, they stick with old ideas that the Old City of Jerusalem will always remain a part of Israel, or in opposite, that it will be absolutely a part of a new Palestinian state, as stolen land that has to be given back. With these visions, a future Jerusalem will be a divided city with an East Palestinian and West Israeli part, with barbed wire and checkpoints in between, like the situation of the city from 1948-1967. Or, coming closer to an agreement, people suggest -like proposed in the “Geneva Accord” in 2003- to make a complicated dividing of the Old City in a Israeli and Palestinian part. That will mean that the small alleys will be split by walls and barriers too. The idea that a future Jerusalem will become a divided city, is something that we have to prevent.

There are living about 250.000 Palestinian and 500.000 Israeli rather close together in one city. Do they want to make a separation of Jerusalem in parts or do they choose, deep in their hearts, for unity? So my best friends, it is our task to inform the whole city that there is an alternative for the Jerusalem of today.

All lovers of a united Jerusalem will come together to encircle and embrace the Old City of Jerusalem with love and devotion. We have to encourage all inhabitants of Jerusalem to join the coming Big Hug, with the idea of a New Jerusalem that might be realized with their support.

Abed khalil said…
Hi DR Lovi Eva
please i turning to u and all israeli peace activist friends to extend there hands to help in following human call,
Abed

You are welcome in mepeace community. I agree with you that the life is very difficult without peace.

Eyal Raviv said…
Welcome Eva, I am so glad you joined us.
Enjoy us. Use our Features. If you have a question on the site, see our FAQ. Please share your Feedback, and please invite your friends to join us.