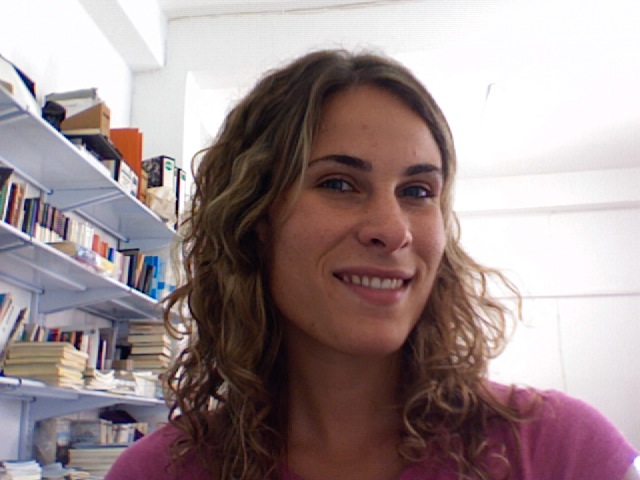 "1948: 60 Years After, Independence/Nakba, What Is Next?", Palestine-Israel Journal

My personal story:
I come from the suburbs of Los Angeles but who I am hails from my living experience in the San Francisco/Bay Area where community activism is hard to miss. I now live in Tel Aviv and work as the Online Content Editor of the Palestine Israel Journal as part of my journey to understanding this conflict and what it will take to get somewhere that looks better than where we are now.

Why I want peace:
I want peace because if we don't get it and soon, we're not going to last much longer.

Something you didn't know about me:
My middle name is Nicole.

What I want to achieve here:
Greater traffic on the Palestine-Israel Journal website, www.pij.org, in order to spread our message and that of our writers, to encourage greater debate, dialogue and participation on the part of civil society with regard to the Israel-Palestine conflict.

Featured this week on the homepage of the Palestine-Israel Journal, www.pij.org

Several months ago, an Arab lawyer named Khaled Kasab Mahameed and the head of a Holocaust survivor organization were heading to Ramallah to make arrangements between the PLO and that organization. With the two men was a former PLO combatant who had spent three… Continue

War and peace are two popular media topics in the Middle East. When will war break out and who’s working on a temporary peace to prevent war, which most people believe is inevitable anyhow?

Mainstream journalists, politicians and pundits portray the peace process in the region as one that goes around in circles, featuring… Continue

The following entry appeared on the Palestine-Israel Journal Blog on October 16, 2007

tarazi yahya said…
hey how are u

sameeh kh. said…
thanx for the add
nice meeting ya

Ahmed Ata said…
did you think the map u show is future option . just huge cities prisents
for Palestinians.
you know this not solution ,and Israel fail to gushiate by power . and our people will not accept country like this ,