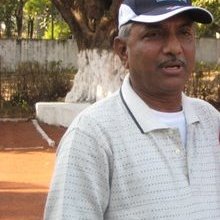 My personal story:
just a wanderer in this huge universe......... searching for love

Why I want peace:
there is no other way to save this universe

Interests and activities:
Profession : Marketing engineering products,
Social: helping marginalised people to get their confidence back by setting up small entreprises. Make groups..

Something you didn't know about me:
HI I can take part in any activity tp promote peace and love on this planet

How I found mepeace.org:
through friends from Development Crossing

What I want to achieve here:
ideas about promoting peace... join group for discussions and find solutions at grass root level..

Christopher Routson said…
I want to tell the Truth about God's Law the penalty for braking God's Law and the Gospel that will set you free from that eternal penalty. This is the way to real personal peace. Not as the world gives, true peace.

Bad is an understatement of the human condition...more like wretched. Here is how you can see the wretchedness of your true human condition; first would you consider yourself to be a good person. Please answer to yourself yes or no; Ok...Now answer these questions to yourself as they apply:

If you are honest with yourself you will have answered yes to all.
So we are really not Good are we.

Judge yourself by the 10 Commandments...remember it is not me who judges you I don't have that right, but God who created you does.
Hear me out here...with good conscience can you really say you have never done these things.

Jesus says in His word that anyone who looks at another with lust is guilty of committing adultery in his or her heart.

Another passage says anyone who hates is guilty of murder in their heart.

He also said that ALL liars,thief's, murderers, and adulterers will have their part in the lake of fire "hell"

Jesus created Hell for those who are guilty of breaking His Law the 10 Commandments, and if you just break one the bible says you are guilty of them all.

I was guilty once, I know what is was like to rationalize God and who I tried to make him to be in my own mind....which is Idolatry breaking the 2nd commandment. I was once hopelessly lost just as you are. By God's Law I seen my wretchedness and came to the realization I need a Savor to save me from Hell that I deserve no question.

Guess what, you now deep down know what you are guilty by the Law and we only went over 4 of them....how are we doing on the Good scale so far...not good. Yes we can put up a front and say have a nice weekend to appear to others as good as to cover up the real words of "Get real" "Dude this guy is wack" "You have got to be kidding" and so forth. But be real with yourself. The reason Jesus Christ had to come to earth and die was for you, God created you in His image, the devil lied to man causing them to doubt the truth of God, and the fall of mankind, sin, and evil flooded the hearts of man that explains the above guiltiness of your true state of hated of all things "Jesus Christ" in which you live today.

Atheists don't run to God in the same way a thief doesn't run toward the cops. - Ray Comfort

Now do you see a need for God to send His only begotten Son to die in your place so that you wont have to go to hell? Is it now all of a sudden practical to put your faith and trust in Jesus Christ for the forgiveness of sins and guiltiness before a Just Righteous and Holy God. Remember a guilty criminal in our court system wouldn't look to the judge and say, hey I'm a good person you should let me off the hook...what if that guy was guilty of murdering your parents or child. Would it be fair to say he is going to get what he had coming even if he yells out hey I don't believe in electric chairs!!

You would want Justice..how much more does God for His children.
So stop coming against the things of God.... run toward Him with a broken spirit and guilty conscience and give your life to Jesus Christ who will never let you go to hell once you put your faith and trust in Him and Him alone. Stop justifying yourself but rather be justified in the sight of an all seeing and all knowing God who loves you and is waiting for you to run into His arms for your salvation. Ask Jesus to change you right this second cry out to Him, repent of your sins "turn away from your sins" and believe in your heart that He died for you personally and by faith believe that He was raised from the dead because He is God and can do that, confess with your mouth that Jesus Christ is Lord and make it your own prayer. Hell is a horrific place where you will burn for ever, Heaven is a place of true joy and bliss forever with your creator who loves you so much that He would die to get you there with Him.

harry deloria handenero said…
hello ravi pratap shahi your welcome here and to be my new friend hope to do good will in this organization your so blessed cause you help and share your knowledge to made peace on middle east or any place that they need peace your welcome here in my place to see me personally and may you say oh my god its you harry...

Christopher Routson said…
Through the love and acceptance of Jesus Christ He is the only way. I know if you in the search for truth and peace were to ask Jesus to come into your heart...if you havent already, only then will you find the peace that is true peace . I want nothing more then to see people come to Christ. He has changed my life He will change yours for the good. It is written., and Heis comming is so close. today is the day to trust Him, He will guide your lifeto true peace.

Christopher Routson said…
I know where you can find love that will last forever with peace that is all surpassing It has nothing to do with this earth...ask me how

Glad that you joined us.

Eyal Raviv said…
Ravi Welcome, you have great interests.
Enjoy us. Volunteer , read our News, follow our Guidelines and use our Features. If you have a question, see our FAQ. Want to Support us? Please share your Feedback, and Invite your friends to join us.