Standing for mepeace at the Peace NGO Forum

The Peace NGO Forum of the Peres Center for Peace convened

its Israeli organizations this week for the fifth time. I shared mepeace in a little speech I made as a candidate for a position on the Forum's Steering Committee (see video of the speech here). I did not win. I have no regrets.

The Forum is currently comprised of 122 organizations: 74 Israel,… Continue

mepeace brainstorming - I want to hear you too!

Brainstorming has helped mepeace become what it is. A myriad of people have contributed! This week we held our latest mepeace brainstorming meeting. In this photograph, at the conclusion of our meeting at a Tel Aviv Coffee Bean and Tea Leaf, you see me between Allie and Kfir, aI thank them and Elad and Dolev for participating and for bringing their experience to bear. The ideas they generated for advancing mepeace were just fantastic and included:… Continue

Personal Responsibility on a National Level

The young members of the Labor party in Israel held a meeting this past week at party headquarters. 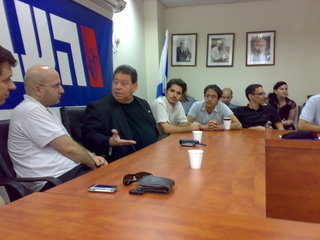 Young leaders of Israel's veteran political movement convened to discuss currents and invited the wisdom of Binyamin Ben Eliezer, Israel's serving Infrastructures Minister. I asked him this: Where is Israel taking responsibility? The Minister explained to us where the U.S. was at fault, and where the Palestinian leadership had erred. I asked him if he would take responsibility, as a… Continue

One week ago, OneVoice was supposed to execute simultaneous peace events in Jericho, Tel Aviv, London, Washington and Ottawa. OneVoice is a movement that works to give voice the silent majority. The idea is that most people on both sides of the Palestinian-Israeli conflict are moderates, but we don't hear their voice because the media highlights the other sides' extremists. The great event, featuring respected personalities, musical… Continue

Healing the Heart of Humanity

THREE MINUTES TO CHANGE: A Link to a movie entitled Paper Airplane by Michael McMillan

I really found this short movie very inspiring and hope you do too. Individuals, and nations too, sometimes get stuck in particular thoughts and need to "think outside the box." This movie shows us it is possible to do so. This is the link the author gave me but it appears you'll have to copy and paste it into your browser. If someone else has already posted this great movie then good, here it is again. Great minds think alike :->

The First Israeli and Palestine racing-team, they should be here, as Peacemakers,
Aric Lapter and his Co-driver Rashid Nashasahibi.

I saw them on Dutch television, and the Dutch reporter said, that they sure are working on the Peace


Participate in Creating a Better World, One Couch at a Time

Gaza
article to be read here :(

A zoo. This is one of the ways that Palestinians describe the conditions under which nearly 1.5 million of them have
been living: in an area of some 360 square kilometers, closed in on
three sides by sophisticated barbed-wire fences, concrete walls and
military lookout towers, and to the west by Israeli navy ships… Continue

A site I stumbled upon, Znet 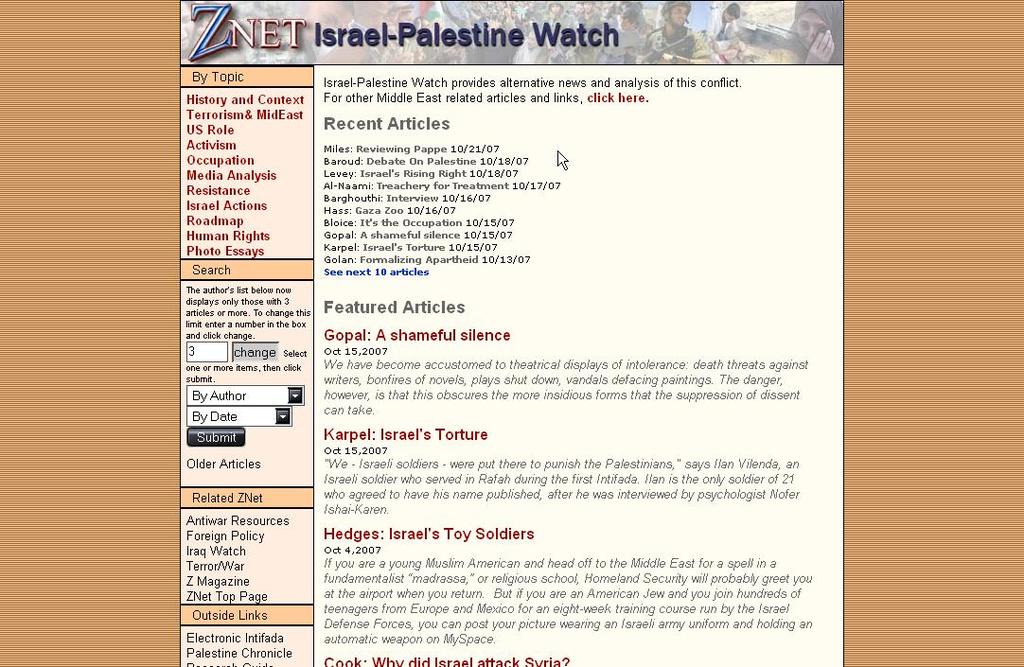 Israel 2020 - strategizing for a model society

Israel 2020 is a new movement in Israel is working to develop a model society. To me, a model society in Israel is one where people are optimistic, respect one another, and strive for peace. I participated in a conference on October 11-12 to strategize ways forward.

The conference challenged its sixty participants to be creative. Participants, of varying faiths, ages, and political views, worked in teams dedicated to a specific cause… Continue

Today is the day!

Let it fill with gratitude

now..... send an ocean of love, peace, and gratitude to every woman, man, child, animal, and our precious earth!

Today is a great day for UP.

Today is the day where we get to start anew no matter who we are, no matter where we've been.... TODAY IS THE DAY!

I am setting my intent to spread love, light, peace, blessings, perfect health to all.

This is your friend Kaa reporting to you live from Israel!

Say, ever heard about the BABA SALY ?

The BABA SALLY was a great and famous Rabbi and a miracle maker of the the North African Jewry.

The BABA SALLY was born in Morroco and came to Israel. He died in Israel in the 1980's but his figure and the stories behind him are still revered today by many Israelis and other people.

Whenever I think of Israel and Israelis it reminds me of…

Make your own healing water for Peace In the Middle East

I am the originator of a method that gives you the possibility to make your own healing water. You can use your own tap water and you donneed to buy special water to make it.

You use what I call the Triple Breath, it it a sound you play for the water. You can find my free ebook here, and you can read much more. The short version is this, you take a… was in Tel Aviv last night. The minister showed courage in sharing his personal story (see video). I heard him voice his optimism for peace. He was candid and forthcoming, particularly delightful! I shared mepeace with him before the event commenced.

Peace and war - A difficult dichotomy. Where is the root?

I only just discovered this portal and I feel like I am stepping into the fire!

First if people who read this might liek to also read my profile it may give an understanding where I am coming from.

I have this strange dichotomoy which goes through me - it never goes away. I have done much personal work to uncover my own sources of frustration and anger...and yet....

I still get incredibly churned up when I come across…

It's a pleasure to meet each of you. Feel free to visit my blog
on peace education and peace-building in the classroom. I am
currently implementing peace education in the English classroom
of a juvenile detention center.

mepeace.org is a great project and a great web site !

We need not wait for our "leaders" to agree us a peace.

Every new member in mepeace.org is a peace agreement!

And besides peace, we Jews must do something about these long long holidays.