90 years ago exactly - The Balfour Declaration 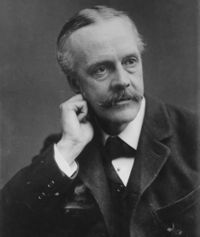 Ninety years ago today, Lord Balfour (see picture) penned the following declaration. I wanted to share my thoughts on this document.

First, the letter is written to Lord Rothschild. It is a letter addressed to a private person, not 'the Jewish people', but a letter that addresses their aspirations. Second, notice that the declaration was submitted and approved by the Cabinet. Declarations are not submitted. Proposals are. The declaration, or news, is in fact the acceptance and approval or the "sympathy" declared. Third, the declaration refers to the establishment of a "national home..." as fact (already in 1917). "His Majesty's Government views that fact "with favour". Fourth, see "national home for the Jewish people". There is recognition of Jews as "a people".

Here is the declaration (gotten from that wonderful source called Wikipedia):

Dear Lord Rothschild,
I have much pleasure in conveying to you, on behalf of His Majesty's Government, the following declaration of sympathy with Jewish Zionist aspirations which has been submitted to, and approved by, the Cabinet:
"His Majesty's Government view with favour the establishment in Palestine of a national home for the Jewish people, and will use their best endeavours to facilitate the achievement of this object, it being clearly understood that nothing shall be done which may prejudice the civil and religious rights of existing non-Jewish communities in Palestine, or the rights and political status enjoyed by Jews in any other country"
I should be grateful if you would bring this declaration to the knowledge of the Zionist Federation.