Role of Religion in Promotion of Peace and Conflict Resolution 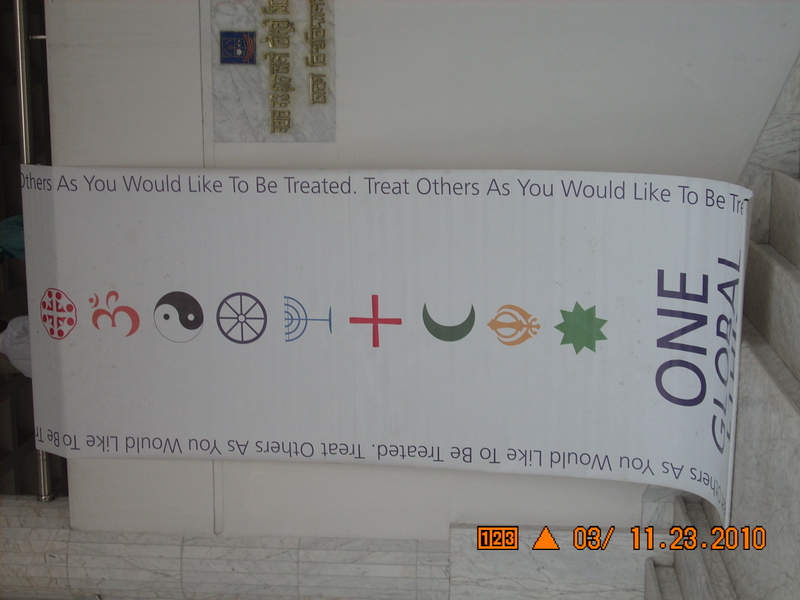 Before I begin, I would like to thank the organizers of this conference for giving me an opportunity to present my views in this conference. Being a student of Conflict Analysis and Peace Building, I will focus on: why and how religion & violence are associated? And on the role of religion in the history as well as in present age to promote peace and to prevent and resolve conflict.

Why and how religion and violence are associated?

I believe that religion and violence are associated with each other for two reasons:

1)     People fall prey to the plan of Economic Fundamentalists and

2)     People do not know their own and other’s religion.

Many powerful government & non-government agencies of the world are involved in propaganda against religion. They use media for this and most media houses are owned by large business houses with a variety of commercial interests. In an atmosphere which is vitiated by such propaganda it is very difficult for the ordinary citizen to filter fact from fiction, thus falling prey to their plan.  They want to marginalize, weaken and minimize the religion’s role in influencing the world system.

According to a well known Indian scholar, Sudhir Kakkar[1], if we look closely at individual cases around the world, we will find that much-touted revival is less of religiosity than of cultural identities based on religious affiliation.  In other words, there may not be any great ferment taking place in the world of religious ideas, beliefs, rituals or any marked increase in the sum of human spirituality, where the resurgence is most visible in the organization of collective identities around religion, in the formation and strengthening of communities of believers.

Indeed, most secular analysts and progressive commentators have traditionally sought to uncover factors other than religion as the root cause of an ostensibly religious conflict. This has been as true of the anti-Semitic pogroms in Spain in the 14th C, of 16th C Catholic-Protestant violence in France, of anti-Catholic riots in 18th C London, as of 20th C Hindu-Muslim riots in India[2].  The ‘real’ cause of conflict between groups in all these instances has been generally identified as a clash of economic interests, explanation embraces some version of a class struggle between the poor and the rich.

Today, the world is subjugated neither by religion nor by science. It is dominated by economy. According to Dr. Javed Jamil, Economic Fundamentalists seek to put economics ahead of every other thing. Every religion aims at achieving peace, harmony and gives less importance to materialistic things. This principle is common to all religions in the world and this is what irritates the ‘Economic Fundamentalist’ the most. For promotion of materialism, they try to create a love for this world.  Their plan cannot be succeeded, unless people become least ‘entangled in moral dilemma’, and the love of this worldliness ravishes that of the other worldliness[3].

Anti-religionists and pro-economists try hard to propagate religion as an evil and they have been successful to a great extent in their mission. But it does not mean that these forces are Pro-Communalism. Communalism was also seen as a major anti-economic player in the international arena. They countered communalism more harshly due to its ideology of being anti-economist and marginalized religion by making it only a part of “people’s private lives”.

We can’t ignore the fact that Religion, next to family, is the second oldest institution. It governs the social as well as personal behavior of man by providing guidelines, laws and principles relating to his interaction with his fellow man. I believe that this was one of the strongest forces which used to maintain peace in the society.

One of the main aims of religion is to promote ‘justice’. Since justice is one of the main pillars of peace, the elements of peace and religion are same. Peace can be achieved only when there is law and order, and a state of harmony and mental calm prevails. From the beginning of the world, religion has existed to help individuals, groups and communities to achieve justice and peace.

If we look at history, we will find many examples where religion compels individuals, groups and communities to follow the path of peace and to avoid conflict. Here I could have quoted hundreds of verses from scriptures of different faiths where significance of peace is mentioned. But I would prefer to quote only practical examples where religion compels individuals, groups or communities to promote peace and prevent or resolve conflict. Here I am quoting examples from 4 different religions, at three levels - individual, group and community level.

1.      At the individual level, one of the best and clear examples is of Asoka the Great. King Asoka (see Cambridge Studies of Religion, pp. 101-104) is a significant example of one who sought to live in a way that contributed to world peace. Living in India in the 3rd C BCE, Asoka left the life of violence that he led when he was king in North India, after being greatly influenced by Buddhist monks. He ruled his kingdom based on Buddhist principles.

2.      Another example at individual level is that during the Apartheid regime in South Africa, many black South Africans and some white South Africans were inspired by their Christian faith to “fight” for peaceful resolution of the black-white divide, to lead non-violent opposition to the racist discrimination against black citizens, and to stand against racism in all its forms. One of the most notable among black Christian leaders is Archbishop Desmond Tutu. He went on to head the national Peace and Reconciliation Commission appointed to publicly acknowledge the crimes of apartheid, and to bring offenders and victims to the same table, in order to lay the foundation for the newly integrated republic to move beyond the colour divides towards nation building.

3.      At the group level, another example where religion promoted peace and prevent conflict was of victory of Muslims over Mecca. The Prophet (PBUH) entered Makkah and captured the city with hardly a single drop of blood being shed.  After his conquest of Makkah, the Prophet (PBUH) displayed the utmost humility and forgave all bitter enemies and declared a general amnesty. The victory of Makkah had a tremendous impact on the Arabs. It showed that Islam was the religion of Peace and it paved the way for the whole of Arabia to accept the faith.

4.      At community level, we can find many examples from tribal religions of African countries as well. In his paper, Kosomo Daniel mentioned that “In Kenya, there was a conflict between two tribes called Luo and Maasai and later it was resolved. The Luo - Maasai peace covenant, exhibits a strong feature of religious dimension in peace and reconciliation process. It started with convening of inter-communal meeting on the border where the battle ensued. This was as a result prolonged war or conflict. The participants comprised men, women, youth and children. Branches of poison trees and weapons of warfare were placed along the border so as to form a fence between the antagonists. The lactating mothers of conflicting groups exchanged their babies across the fence so that each could suckle the babies of the other group. Prayers led by respective elders and religious leaders followed this. They beseeched God to bless the covenant of peace (Shenk, 1983). The exchange of the babies across the fence by the mothers and the suckling of one another's babies implied that the warring parties had become kith and kin”[4]

These are some of the practical examples where religion played a vital role in maintaining peace.

I do agree that we have differences. But we should not ignore them; on the contrary, we should discover them and become better aware with each other and enhance our understanding about one another. The Almighty has created human beings as different races and nations so that they can be tested, how just we are to those, whom we consider “others”? How we can live together with thousands of differences among us? It is comparatively easier to be kind and just to one’s people but the challenge comes when the same justice has to be extended to other people. And our Humanity is failing this test.

I have no doubt that there will be complete peace and tranquility in this world if the followers of different faiths live up to the high principles set before them by their respective religions, then the world will move from Clashes of Civilization to Dialogues of Civilization.

Personally, I believe that in the present age, three things are missing from people’s lives (i) Love (ii) Faith and (iii) Fear. If a person loses these three things, he/she becomes Fearless or violent too. Love for humanity and God, keeps a person humble and happy. Faith in God that everything will be alright keeps a person going on. And Fear from God, keeps one down-to-earth and kind.

Religion is one of the strongest institutions that help a person believe in these three things simultaneously as they are important to control human behavior. I would like to conclude by stating that Religion is not only a promoter of peace but it has also worked in the field of conflict prevention and resolution for ages.